Feb. 2015 update: I just saw a friend’s newer copy of the Ani Tefillah Siddur, and was pleased to see that it includes Chol Hamoed, including full services for Hoshana Rabbah and Hoshanot. So those critiques in my review should be disregarded.

As I have been critical in the past (link) of Koren’s work, I think it is only fair to highlight a new project they have undertaken for which they deserve a wealth of credit and praise. Full copies of their two new youth Siddurim (link) were given out at the #IJed #Conference (link) that I #attended this past week. One Siddur is designed for Kindergarten-2nd grade; the other is intended for high school students. Two more Siddurim, one for upper elementary grades and one for middle school, are in process. This review is based on my experience with complete copies of the two new Siddurim currently available. 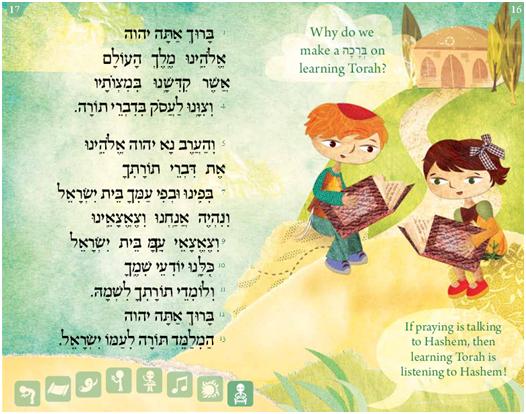 This is a graphically pleasing Siddur for Kindergarten-2nd grade which attempts to engage the students’ hearts and minds in the Tefillah experience. The numbered lines and carefully chosen pictures will be a great help to many teachers, especially those who take the time to read and make use of the extensive teacher’s guide.

What disappoints me about this Siddur, besides its omission of most of Ashrei and the vast majority of Shemoneh Esrei and sometimes sporadic inclusion of other Tefillot, is the fact it largely falls short of its potential as an educational tool. Perhaps their upper elementary Siddur will highlight recurring Shorashim or include a basic translation of the Tefillot, but I think those would have been worthwhile innovations even for this first effort. Looking at this growing series as a continuum, it would have been exciting to see a very basic tier of Shorashim, prefixes, and suffixes highlighted in representative colors throughout the text, with translations of the Shosharim in a list at the back of the Siddur, and with more advanced tiers of words highlighted in the succeeding volumes. Perhaps the potential of having four Siddurim could lie, in part, in integrating the graduated rudiments of an Ivrit curriculum rather than viewing Tefillah as its own course of study divorced – although it always has been so – from the students’ burgeoning study of Ivrit.

That said, the pictures and reflection exercises have been chosen with ample taste and with attention to the themes in the Tefillot, and that is a welcome and creative innovation. I am confident that many of our schools will adopt this new Siddur for our younger grades, and it has many advantages over the standard “Chinuch Siddur” currently being used in our schools.

Koren found the right collaborator in Rabbi Jay Goldmintz, the principal of the upper school of Ramaz but, more to the point, someone who has invested tremendous energy on studying how Tefillah affects teenagers (link). What Rabbi Goldmintz has created here is a work of genius, in the classical sense of its being obvious in retrospect but nearly impossible for most of us to have arrived at in prospect. The revolutionary multi-tier commentary is divided into Biur Tefillah, Hilchot Tefillah, Iyun Tefillah and Ani Tefillah (the latter comprising often scintillating and surprisingly personal thoughts and reflections), thus allowing the user to connect to Tefillah as she or he feels most comfortable on a given day.

The commentary, both in content and style, has been written with careful attention to high school students, which can be a difficult demographic to get a handle on, particularly as they relate to Tefillah. The work Rabbi Goldmintz has done on Shemoneh Esrei of Shacharit is simply astounding, and, creatively, Shemoneh Esrei of Mincha has been left blank to allow for notes and reflections by students. Each of the three Shemoneh Esrei prayers can be used for any weekday Tefillah service (although, seemingly by accident, Shalom Rav was left out of Shacharit). To each Aliyah of the weekday Torah readings in the back of the Siddur, Rabbi Goldmintz has added thought questions to keep students focused at a difficult time in the service. This Siddur is visually and intellectually addictive; I started using it out of curiosity, but I believe I may have found a Siddur for life.

So how could the best be made even better? A few notes of suggestion. In my work developing a Tefillah curriculum for 6th graders (link), I have found an important part of our learning to be Seder HaTefillah, the order of the various Tefillot and how each contributes to a logical and inspiring whole. Rabbi Goldmintz seems to agree; in his introduction he displays two such models graphically. I would like to see more of that kind of thinking throughout the Siddur, because understanding each Tefillah on its own misses a large part of the puzzle that is Shacharit. The graphics in the introduction could be reintroduced at appropriate parts of the Shacharit service, such as when a major step forward is taking place, and a “Seder Hatefillah” section could be added to the commentary so that every Tefillah could be contextualized in this way using words, if not pictures. Perhaps Iyun Tefillah and Ani Tefillah could be combined to prevent there being too many sections on the page.

I also think that this Siddur could afford to go on a diet, with a lot of girth taken up by what seem to be arbitrary selections in the second half. Do we need the prayer after childbirth (p. 622) or the Chanukat Habayit service (p. 598)? Do we need the entire Yom Tov Pesukei Dezimrah (484-511), for the benefit of the minuscule number of people who recite it on Yom Haatzmaut? Ironically, despite its being over 800 pages, there was no room in this weekday Siddur for the Chol Hamoed Mussaf or Hoshanot. Are we really ready to cash in Chol Hamoed for Yom Ha’atzmaut? That seems to have been at least a semiconscious decision by Koren. Along the same lines, the Siddur could be made Motzei Shabbat-friendly with relatively little effort on Koren’s part. I would also like to see more commentary, if only brief introductions, to more of the sections in the second half of the Siddur.

I have long noticed a chasm in the Jewish publishing world between youth and adults, who are more than well served, and teenagers, who have been largely neglected. Virtually no specialized Torah publications exist for that critical demographic, one that often is interested in learning and has money to spend on plenty of less consequential matters. When I first saw Rabbi Akiva Tatz’s “A Thinking Jewish Teenager’s Guide to Life” (link), I thought we may have turned a corner and would start to see more publications geared toward teenagers, but that was not to be. Perhaps what makes me so excited about Rabbi Goldmintz’s Siddur is that with teenagers under watch by the newly resurgent Koren, we now have another opportunity to turn that corner. A teenagers’ Chumash, volumes of Gemara, Jewish history – there is a world of opportunity if the Jewish publishing apparatus is ready to take the chance. For the sake of my students at least, I hope they will.