I Totally Live This: Reflections on the Upcoming Israeli Civil War

As background to this post, one might benefit from reading the actual new Israeli Draft Law (link). I am working on a separate post which will serve as a guide to reading this law, which will appear foreboding to us Americans at first but is actually manageable. I also found this article (link) to make some important points.

A friend of mine posted this now-famous photo on her Facebook page. You’ve probably seen it, too. It’s gone viral, at least in the Jewish sense. 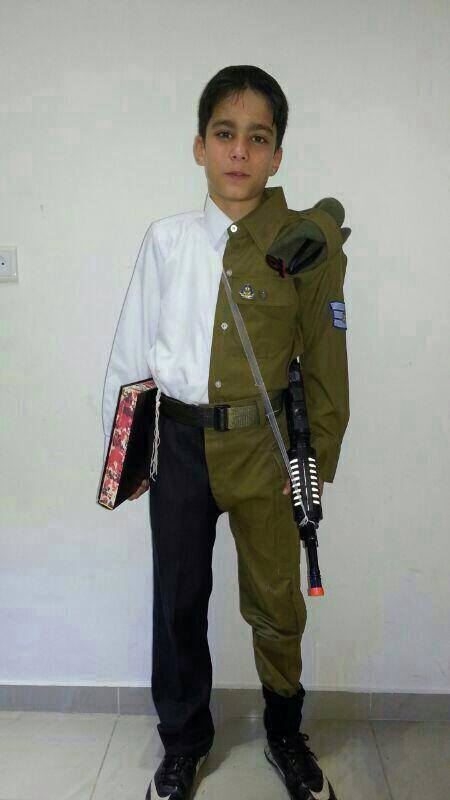 Her comment was “I totally live this.” I knew she meant “love,” but I commented back that I thought the typo was appropriate. This is a statement of our lifestyle. This synthesis is what we believe in; it is what, each in our own way, we do every day. In my own way, I live this, too.

Obviously Megillat Esther was written by Maskilim, the early Reformers. I’m sure it’s not read or studied in Chareidi neighborhoods. Ever notice all the fighting and self-defense the Jews do in the second half of the book? Heretics – why don’t they just study Torah? Didn’t our ancestors know that that was the best form of self-defense? I’m sure Mordechai would have listened to about thirty seconds of that before he summarily chopped off their heads. We don’t mess around with self-defense. When our children hurt themselves on Shabbat, we jump in a car and drive to the hospital. And when our Land is in peril, as it so very much is today, we run to the nearest enlistment office the day we turn 18.

I don’t see Mordechai – or Dovid Hamelech, Shaul, or even Yehoshua “Vihigita-Bo” Bin Nun – making compromises on the deferment age for full-time Torah learners, or pushing off meting punishments to draft dodgers by three years, or pledging camel-loads of money to Yeshivot who obey the law by encouraging their students to actually defend Eretz Yisrael. And if they had, any ensuing “yellow star” comments would have been dealt with quickly and harshly. Torah was important to them, too, but there’s something called Hishtadlut in this world. The rest of the country aren’t sadists. They don’t want their children to die. And nobody wants the children of Chareidim to die, either. But they are living in Eretz Yisrael now, not Poland or Russia, and the Galut mentality that someone else will defend their country, or that defending their country comes with inherent religious perils, has to end before our time in Eretz Yisrael does.

What will someday confuse historians about the coming Israeli Civil War is that it will be fought between secular nationalists for whom protecting the Land of Israel is of paramount importance, and religious zealots whose sole purpose in life is to learn Torah so as to hasten the coming of Moshiach when we can – wait for it – return to the Land of Israel and reclaim our homeland. It’s like the American Civil War, if that war had been fought between slave-owning Northerners and freedom-fighting Southerners. The irony runs deep. Shouldn’t the Chareidim be preaching to the rest of the country about the importance of fighting for the Land of Israel? Isn’t that one of the Jewish values that we waited for all these millennia? It may be hard to recognize, having been away for so long, but I’m pretty sure this is what it was that we were asking for that whole time. How did fighting for and protecting the Land of Israel become a mark of secularism, or an anti-religious value?

Rav Soloveitchik famously compared our ignoring Hashem’s knock on the door (קול דודי דופק) to the events of 1948 and 1967. (link) But perhaps another analogy could be the welcoming area at any major airport, where the newly arrived first encounter and embrace their friends and relatives. Imagine a scene in which one’s long-lost son arrives, ready to run into the embrace of his beloved father. But because they have been away so long, neither recognizes the other. So after a few minutes, figuring that no one has come to pick him up, the son hails a cab and drives away, while the father, figuring his son did not make the trip after all, gets in his own car and drives away. The connection can only be forged if there is some semblance of familiarity; if the distance has been too great, they hold no hope of recognizing each other. Perhaps we have been away from our Land for so long that our most basic, obvious, and elemental obligation to it has been lost to many. We have taken the flight, landed safely, and are inches away from the loved one we wrote love letters to for centuries – and yet through the millenia of neglect, we have become so unfamiliar as to not even realize how close we are. This is worse than קול דודי דופק; this is ממעיך יפרדו. This is having opened the door – and then closed it again because we thought the one knocking was the town beggar, not our own child. That is the greatest tragedy of all.

There is a beautiful Midrash (Bereishit Rabbah, 39:8) which provides an interesting account of what made Avraham want to live in Eretz Yisrael:

Avraham wanted a Land which would require work, toil, effort, and labor. If it was a place in which he and his descendants could eat, drink, and play without having labored to achieve those ends, he wanted no part. Interestingly, in the Midrash, Hashem only promises Avraham the Land once He sees that Avraham has come to that realization on his own. If Avraham had not held such a value himself, if it had had to be forced upon him, then that message would not have stuck with him or with his descendants. From the moment near the end of the Book of Bamidbar in which we are adjured to fight for the Land – וְהוֹרַשְׁתֶּם אֶת הָאָרֶץ וִישַׁבְתֶּם בָּהּ כִּי לָכֶם נָתַתִּי אֶת הָאָרֶץ לָרֶשֶׁת אֹתָהּ – until the end of Tanach, there is perhaps no more consistent theme than our need to fight for and defend the Land of Israel. Our time away may have obscured that need in our minds, but it has not changed it materially.

None of this should detract from the very real effect that Torah learning has on our national self-defense. But the defensive stance that the government is somehow denying or detracting from that effect is not corroborated by the fact that the new law (link) (link) states that 40% of Chareidim will be allowed deferment for life. 40%! The government’s bankrolling a full-time Torah community larger than we have seen in our entire history, including Bavel, should be more than adequate for the Chareidi community. Their lack of compromise despite that 40%, and despite the age 24 draft, and despite the 2017 punishment deferment, all speaks to a community that would rather play a game than actually create the very strong Torah community that the government is offering to create with sufficiently little in return that the Chareidim should be very, very grateful. The continued posturing, and protesting, should be regarded as little more than the Chutzpah of a community that does not realize that defending the Land of Israel in an army with separated units, Kosher food, and Shabbat is not the same as defending Czarist Russia one hundred years ago.

Every Chareidi should be writing a Thank You note to the Israeli government. For the new deferment age of 24, which essentially creates a government-sponsored yeshiva system for all Chareidim ages 18-23. For deferring punishments until 2017, allowing the Chareidim to first reclaim seats in the Knesset in the next election. For throwing money at yeshivot that obey the law, which again, like it has done so many times before, amounts to a strengthening of Torah by the secular government despite its getting so little back from the Chareidi community it supports. But most of all, for reminding the Chareidi community of its most basic religious obligation – to live in, support, and defend the Land of Israel. It’s not just the most morally sound approach, it’s what Hashem wants. Perhaps what Avraham realized on his own, that any Land worth having is worth protecting, may need to be told directly to the Chareidim, and perhaps not by people they respect. However sad it may be that the Chareidim need to be reminded of this by others outside their camp, so be it.

This entry was posted in Communal Matters. Bookmark the permalink.